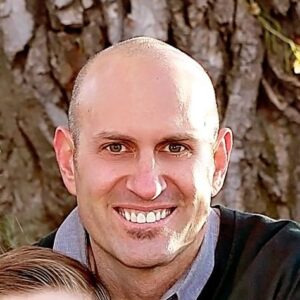 Andrew Davies is Colorado Center of Aging’s new Executive Director and he’s very excited to start this new endeavor with us! He is a proud Colorado native who loves to hike and ski, grew up in the south suburbs of Denver, and received his Bachelors in Engineering (of all things) from CU Boulder. He’s also had season tickets to the Broncos in his family since they joined the NFL in 1966 – go Broncos! He loves spending time with his two wonderful kids – Jackson (14 yrs) at Rocky Mountain High School, and Greta (10 yrs) at Traut Elementary in Ft Collins, where they all live.

As far as Andrew’s professional life, credentials, and role, he’s been in non-profit and ministry for over twenty years serving as director or pastor (degrees from Princeton Seminary and Loyola University), but more recently serving as the SeniorCorps-RSVP Director of Larimer County and the Volunteers of America Volunteer Manager in NoCO. There he continued to hone skills and gain experience in program development, fundraising and marketing, personnel management, partnering and networking, and vision-casting.

He’s excited about this position with us at CCA as it will continue to challenge and develop him in an executive director role, help him pursue his passion for issues concerning older adults, and give him a new, exciting, and hoped-for window into the political goings-on of education, lobbying, and advocacy. He wants to do just what our CCA charge is – “To raise the voice of older Coloradoans!”. His first goal as ED will be to work with the board and current members and stakeholders to define the current messages of that “voice”, and to figure out the best ways for it to be heard throughout our fine state.

Thank you for joining us Andrew, we’re excited to have you and support you; you’re a great addition to an already great team which, for decades, has helped raise the voice. Onward and upward CCA!